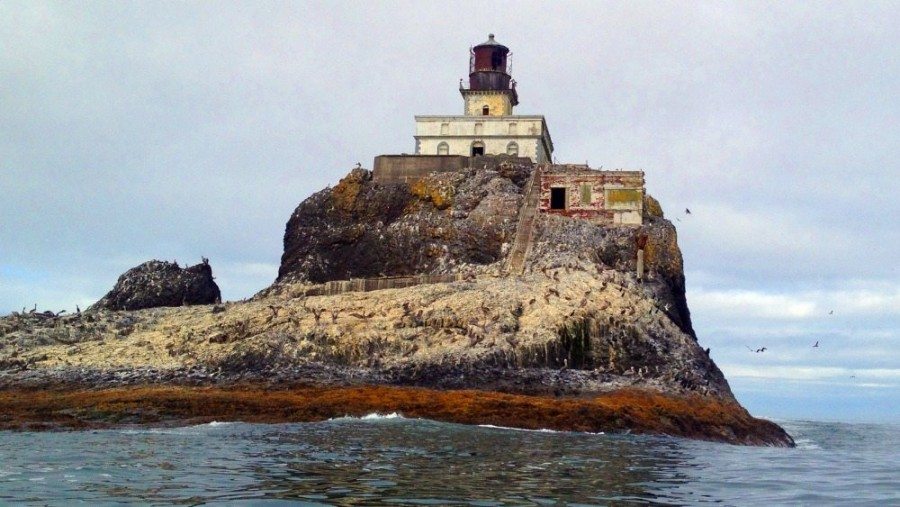 Perched atop solid rock more than a mile offshore from Tillamook Head, the notorious Tillamook Rock Lighthouse, (nicknamed “Terrible Tilly”) is rife with mystery and legend. She still stands today, though battered and bruised, a testament to her storied past.
Tilly’s story began in 1879 when a solid basalt rock was selected as the unlikely location for a lighthouse off the coast of Tillamook Head. Danger and intrigue began almost immediately for Tilly. Before work even began, a master mason surveying the location was swept out to sea, never to be seen again.
Constructing Tilly was grueling work. Just accessing the rock was dangerous, not to mention the stormy weather wreaking havoc on the crew, their supplies and their morale. In January of 1880, four months into construction, a perilous storm sent powerful waves and loosened rocks crashing over the site, sweeping away the crew’s tools, water tank and provisions. According to historical records, all the workers survived, but were stranded for over two weeks waiting for new food, clothing and supplies.
Construction took over 500 days and just weeks before completion in January of 1881, the barque Lupatia wrecked in heavy fog killing all 16 of her crew members. The only survivor of the wreck was the crew’s dog.
On January 21, 1881 Tilly’s first order Fresnel lens was lit for the first time. Light keepers were assigned to duty, but for shorter than typical rotations—42 days on, 21 days off—because conditions proved so harsh, both physically and mentally.
For decades, Tilly and her keepers withstood the ravages of the sea, but in October of 1934, the worst storm on record inundated the entire Pacific Northwest for four days. Tilly’s lantern room and Fresnel lens were smashed by boulders hurled by the storm. It was never replaced.
On September 1, 1957, Keeper Oswald Allik turned off the light for good and made one final entry in the logbook (now on display at the Columbia River Maritime Museum in Astoria, Oregon):
“Farewell, Tillamook Rock Light Station. An era has ended. With this final entry, and not without sentiment, I return thee to the elements. You, one of the most notorious and yet fascinating of the sea-swept sentinels in the world; long the friend of the tempest-tossed mariner. Through howling gale, thick fog and driving rain your beacon has been a star of hope and your foghorn a voice of encouragement. May the elements of nature be kind to you. For 77 years you have beamed your light across desolate acres of ocean. Keepers have come and gone; men lived and died; but you were faithful to the end. May your sunset years be good years. Your purpose is now only a symbol, but the lives you have saved and the service you have rendered are worthy of the highest respect. A protector of life and property to all, may old-timers, newcomers and travelers along the way pause from the shore in memory of your humanitarian role.”
Tillamook Rock Lighthouse was sold to a series of investors over the years, and most recently, she served as the Eternity at Sea Columbarium. She is part of the Oregon Islands National Wildlife Refuge and is listed on the National Register of Historic Places.
Knowing my fascination with Tilly, my husband (who fishes for salmon off Tillamook Head) snapped a few photos for me on a recent trip. What a gift! It was hard to imagine, on a day when the sea was more like a glassy lake, how tempestuous and murderous the waters surrounding Tilly could actually be. But, it was not difficult to imagine what Tilly has been through. She is certainly showing her age. Pelicans, cormorants, and sea lions are her inhabitants and, they along with the sea, are now her keepers in her “sunset years.”
Editor’s note:  The Tillamook Head Trail between Seaside and Ecola State Park in Cannon Beach offers views of Tillamook Rock Lighthouse, as does the Promenade in Seaside. Pause from the shore, if you will, and reflect, as Keeper Oswald Allik requested, on Tilly’s not-so-terrible role in history. 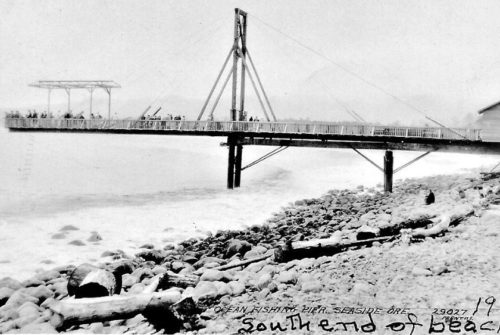 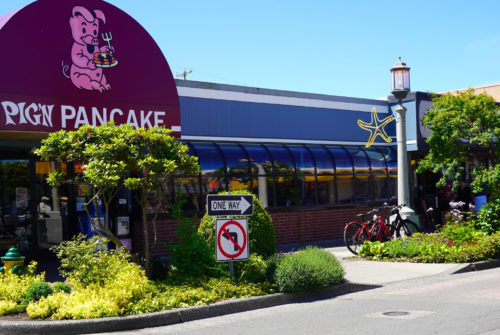 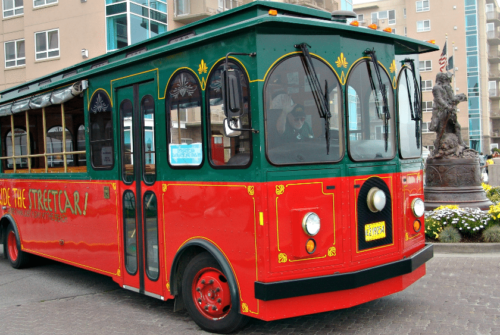 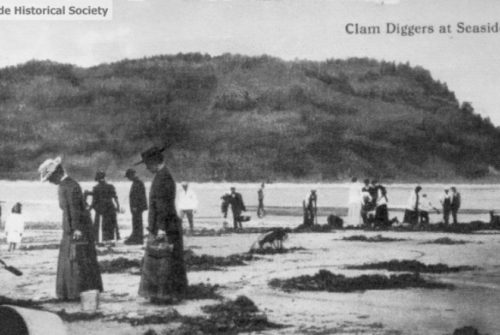 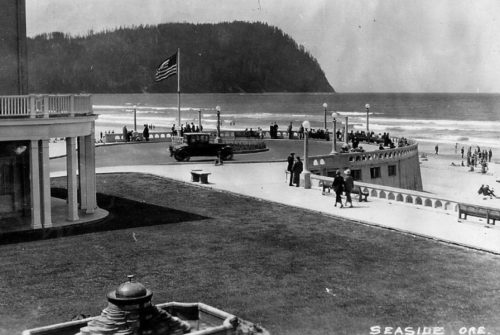 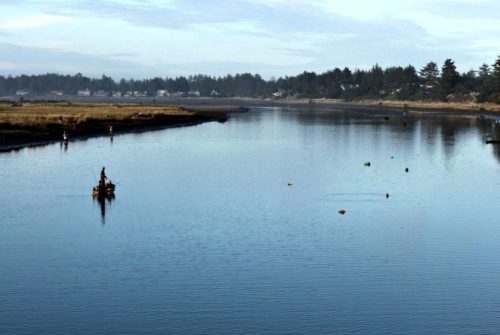 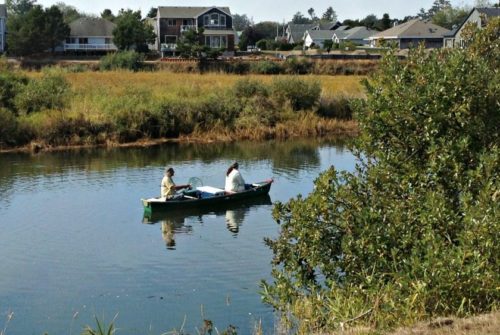 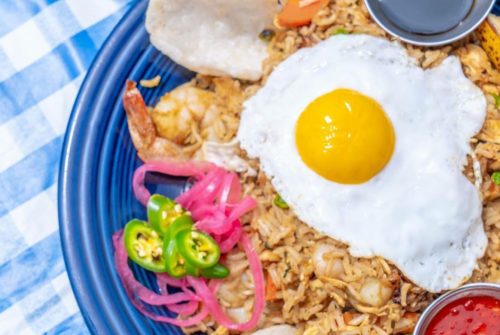 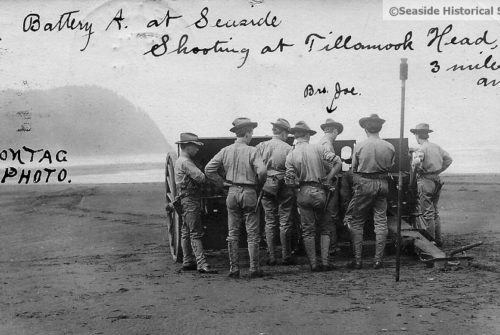 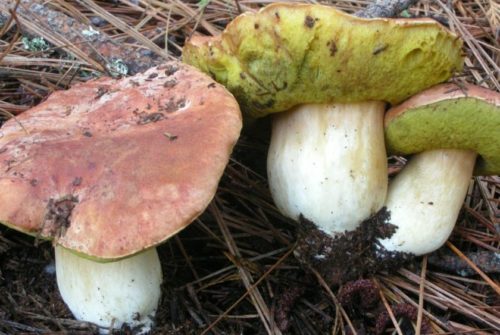