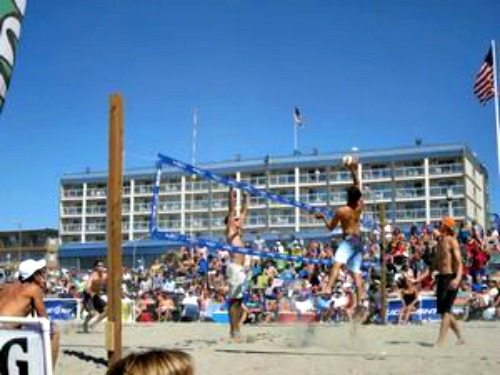 Nearly three months into my tenure as a coastal resident, I’m quite astounded at the events I’ve seen in Seaside thus far. While I’m well aware that numbers can often be skewed any way your heart desires, I’m also aware enough to know what has happened in Seaside this summer – and nearly every summer, for that matter – is truly unique and close to one-of-a-kind.

In July, Seaside’s Independence Day celebration blasted off the summer season with the largest fireworks display (based on total shells shot) along the Oregon and Washington coastlines. Countless volunteers contribute to an event that draws an estimated 20,000 spectators, infusing the local economy with approximately $4 million. Many communities can tout a fantastic display of pyrotechnics, but few can witness them with the Pacific Ocean as a backdrop.
In August, two special events – staples to the Seaside community for over 20 years each – take place in the span of three weekends. The world’s largest amateur volleyball tournament – 29 years and counting – turned out 805 teams competing on 104 courts the second weekend of August. Two weeks later, Hood to Coast – the world’s largest running relay – wrapped up its 197-mile adventure in Seaside as the finish line for more than 20,000 participants (in addition to 1,000 Hood to Coast teams, there are 400 relay-walk teams competing in Portland to Coast). Of those participating, 23 countries and all 50 states were represented.

Remarkable would be understating the efforts and lengths that many go to in order to showcase Seaside as a premiere host to these world-class events.

While one can argue the ultimate effects of events like this on a community both positively and negatively, as a destination marketer I can speak to the fact that it’s rare you have a chance to sell your travel destination product to folks on a first-hand basis. Many participants in both events are repeat visitors. But many are first time participants and making a visit to Seaside for the first time in their life. Visits like these often translate into additional business for a tourist community. The participant sees the city, the sights and wants to return with family and friends. The effects are long-lasting and ones that shouldn’t be overlooked when thinking about why Seaside chooses to host these events.

“World’s largest” is a pretty profound statement to make, but when you can make it twice in the span of 15 days in August, you have something very special.

How do you describe Seaside to your friends, neighbors and relatives? Better yet, how would you, if asked? You may have an answer ...

Tips for customer service in the hospitality and tourism industries