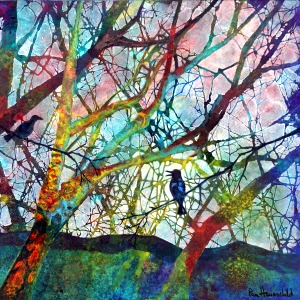 The Seaside First Saturday Art Walk is a free event that takes place between Holladay Drive and Broadway Street in the Historic Gilbert District of downtown Seaside.

Featuring Edi Olson, a professional artist and art instructor for the past 40 years who is based in Vancouver. Mostly a self-taught artist, Olson prefers to paint with a palette knife and then use a brush to refine and add detail. Olson has a fascination and love of ocean scenes, her main subject matter. She describes her style as realistic with attention to detail, light and energy within each painting.

Featuring hand painted wall murals by Oregon artist Donny Masterson, who has a special interest in photography and film. One of the top boutique inns on the Oregon Coast, the Stephanie Inn, has rooms that feature artwork from Masterson.

Featuring a collectable figurehead that served as the face of a ship as it was plowing through water in the last century, a symbolic maidenhead meant to protect sailors, bring good omens, and intimidate the enemies.

Featuring art from Oregon artists in each room of a Victoiran villa. For October the Inn is featuring Raven Lloyd’s new constellation art piece. In addition, offering her hand painted coasters can be mounted and hung as art, as well.

Customer Service and the Bottom Line

As we prepare for a new year and our annual Customer Service Awards Program, we visit the question that most business owners are f...

New Seaside App a perfect tool for visitors and locals